The Key to My Heart by Lia Louis 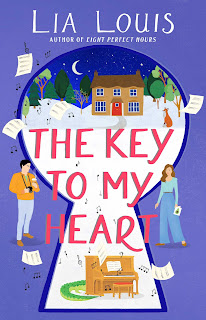 A heartwarming novel about hope after loss as a young widow receives mysterious messages of love from the “must-buy author” (Jodi Picoult) of Eight Perfect Hours.
Sparkly and charming Natalie Fincher has it all—a handsome new husband, a fixer-upper cottage of her dreams, and the opportunity to tour with the musical she’s spent years writing. But when her husband suddenly dies, all her hopes and dreams instantly disappear.
Two and a half years later, Natalie is still lost. She works, sleeps (well, as much as the sexually frustrated village foxes will allow), and sees friends just often enough to allay their worries, but her life is empty. And she can only bring herself to play music at a London train station’s public piano where she can be anonymous. She’s lost motivation, faith in love, in happiness…in everything.
But when someone begins to mysteriously leave the sheet music for her husband’s favorite songs at the station’s piano, Natalie begins to feel a sense of hope and excitement for the first time. As she investigates just who could be doing this, Natalie finds herself on an unexpected journey toward newfound love for herself, for life, and maybe, for a special someone.

A story of grief and love.
Natalie Fincher is heartbroken. Her husband passed away two and half years ago and she was left with feelings of guilt and unable to move forward. She used to write music and play the piano but now her only time spent playing the piano happens when she uses the public piano at the London train station.
Her family and friends are worried about her. Her girlfriends are trying to stir her into dating again but she doesn't feel ready. Yet, she still goes out with them although she would prefer to be home. During one of these outings is when she meets a guy named Tom. Is not too long before Tom and Natalie start a friendship. She confides in him about playing the piano at the train station and someone leaving behind music sheets of songs she use to play to her husband while he was in the hospital.
The mystery surrounding the papers left for her is what propels her to start interacting with more people including the owner of the coffee shop, Shauna and Notebook Guy.
The Key to My Heart was engaging, with a plot that moves forward with a natural flow. My favorite part was the last reveal which was pretty great in my opinion.
This is the 3rd book I have read by Lia Louis and I'm a fan.
I want to thank Melissa and Jayme to read it with me. Buddy-reads are the best!
Cliffhanger: No
4/5 Fangs
A complimentary copy was provided by Atria Books, Emily Bestler Books via Netgalley in exchange for an honest review.
Posted by MrsLeif at 7:41 PM