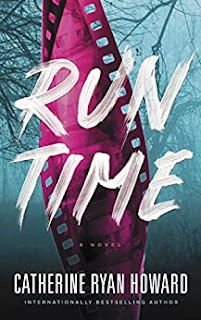 Movie-making can be murder.
The project
Final Draft, a psychological horror. Promising Young Thing Steve Dade will direct.
The tagline
'Based on a terrifying true story. That hasn't happened - yet.'
The location
A cottage deep in a forest, miles from anywhere in the wintry wilds of West Cork.
The lead
Former soap-star Adele Rafferty has stepped in to replace the original actress at the very last minute. She can't help but hope that this will be her big break.
The problem
Something isn't quite right on the set of Final Draft.
Adele is about to discover that the real horror lies off the page...

A book about a film featuring a book.
Did I like it? Yes. Did I love it? No. That's why it gets a 3-star review from me.
Adele Rafferty is ready to quit her career as an actress. She used to be in a popular soap opera in Ireland after being "discovered" as a teenager. She left the soap opera in order to star in new projects. However, during her first new one,  an "incident" happened on set that made her leave Ireland.
At present, Adele is working in a motel and auditioning for commercials when she gets a call with a movie offer. The caveat is that it will begin filming in the next couple of days in Ireland. It's a hush-hush horror movie and she will need to take the job asap if she wants to get it. Without any other choices, Adele signs the NDA. As soon as she arrives at the remote location, weird things start happening. She begins wondering if she is losing her mind or if someone wants her to believe she is.
Run Time was predictable and yet I was never bored. I do wish the ending would have been a little different.
Even though this one is not my favorite by Catherine Ryan Howard, I would definitely read her next.
Cliffhanger: No
3/5 Fangs
A complimentary copy was provided by Blackstone Publishing via Netgalley in exchange for an honest review.
Posted by MrsLeif at 5:14 PM