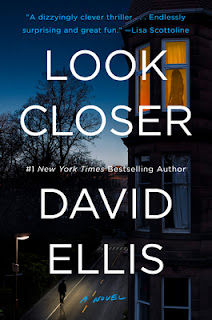 From the bestselling and award-winning author comes a wickedly clever and fast-paced novel of greed, revenge, obsession--and quite possibly the perfect murder.
Simon and Vicky couldn't seem more normal: a wealthy Chicago couple, he a respected law professor, she an advocate for domestic violence victims. A stable, if unexciting marriage. But one thing's for sure ... absolutely nothing is what it seems. The pair are far from normal, and one of them just may be a killer.
When the body of a beautiful socialite is found hanging in a mansion in a nearby suburb, Simon and Vicky's secrets begin to unravel. A secret whirlwind affair. A twenty-million-dollar trust fund about to come due. A decades-long grudge and obsession with revenge. These are just a few of the lies that make up the complex web...and they will have devastating consequences. And while both Vicky and Simon are liars, just who exactly is conning who?
Part Gone Girl, part Strangers on a Train, Look Closer is a wild rollercoaster of a read that will have you questioning everything you think you know.

This is a must-read and I will say, it should also be a must-make movie.
How cool would it be to see these characters come to life?
After hearing so many good things about this book from Jayme, Holly, and Christina (to name a few), I had a huge FOMO. I knew I had to read Look Closer.
I can honestly say that I found it to be addicting. I listened to the audible every waking moment I had when I was not working and finished it in record time.
The characters were intriguing and I was rooting for Simon and Vicky Dobias almost from the very beginning. Yes, neither was perfect but I liked them individually. The other two characters that had a POV were Christian Newsome who is a financial advisor and Jane, the detective in charge of the investigation.
The murder of Lauren Betancourt was committed on Halloween night and maybe one of the main characters was the killer.
That is it. My lips are sealed in regards to any more details. I had none when I started it and I believe this is the way to go to get the most out of it.
Deception, intrigue, vengeance, revenge, and cleverness were all pieces that made this puzzle, one to be remembered.
Cliffhanger: No
5/5 Fangs
Posted by MrsLeif at 8:05 PM