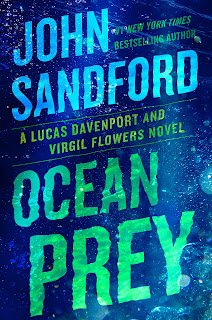 An off-duty Coast Guardsman is fishing with his family in the Atlantic just off south Florida when he sees, and then calls in, some suspicious behavior in a nearby boat. It's a snazzy craft, slick and outfitted with extra horsepower, and is zipping along until it slows to pick up a surfaced diver . . . a diver who was apparently alone, without his own boat, in the middle of the ocean. None of it makes sense unless there's something hinky going on, and his hunch is proven correct when all three Guardsmen who come out to investigate are shot and killed.
They're federal officers killed on the job, which means the case is the FBI's turf. When the FBI's investigation stalls out, Lucas Davenport of the U.S. Marshals Service gets a call. The case turns even more lethal and Davenport needs to bring in every asset he can find, including a detective with a fundamentally criminal mind: Virgil Flowers.
Librarian's note: as of 2021, there are 31 volumes in John Sandford's Lucas Davenport "Prey" series and 13 in his "Virgil Flowers" series. The latest for each, "Ocean Prey," was published in April 2021. It is part of the "Prey" series but Lucas Davenport and Virgil Flowers share the billing; it is considered the most recent in both series.

This one had me worried. So much excitement at the end. Also, this one was heartbreaking.
Did I shed a tear or two...absolutely!
A Coast Guardsman is fishing with his family when he notices a suspicious boat. Since he is off duty, he calls it in. When three Guardsmen come to take a closer look, they are all murdered. The FBI starts an investigation but the trail fizzles out. So when the FBI can't find find anything, Lucas gets involved but he won't go in alone. Rae, Bob, Virgil, Jane Chase, and Louis Mallard all make an appearance. We also get new characters including Andres Devlin and Dale Weaver who were both a good addition to the cast.
Finally, after 3 years and 31 books, I'm finally caught up with this series just in time for Righteous Prey.
Cliffhanger: No
4/5 Fangs
Posted by MrsLeif at 8:03 PM