Ways the World Could End by Kim Hooper 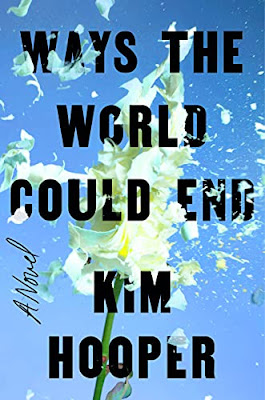 Dave is a Dad with Asperger's.
He sees the world differently than most, and he feels like he has no idea what he’s doing when it comes to raising his 15-year-old daughter, Cleo. She also feels like he has no idea what he’s doing, especially now that her mom is gone.
They were both better off when Jana was around—Dave's wife, Cleo's mother. But now she's not, and they are left to figure out life on their own. Dave dedicates his attention to his newfound hobby of doomsday prepping, researching the various ways the world could end. Cleo feels like her world already has.
Everything changes when neighbors move in, threatening their isolation in the hills of San Juan Capistrano. Cleo is intrigued by the new girl, Edie, and soon finds out the intrigue is mutual. Dave, not at all intrigued, is forced to come to terms with everything he cannot control.
As they struggle to live in the present, both Dave and Cleo must dare to revisit the tragic past they share. What happened to Jana? Who was she, really? Who are they without her?
Ways the World Could End is a story of grief, friendship, and love—the love between parents and children, between spouses, between teenagers, and between strangers. It is a story that requires us to consider the bounds of forgiveness, what we’re willing and not willing to forgive, and reminds us that often the hardest thing to forgive is ourselves.

Quite an interesting YA novel.
Ways the World Could End is about a father and a daughter and their grief after losing Jana (wife/mom). It is also about Aspergers, coming of age, love, and forgiveness.
The audiobook is narrated by Stephanie Willing and Pete Cross. Both did a wonderful job in giving life to these wonderful characters.
Each chapter that begins with Dave starts with him narrating the many ways the world could end. This is the reason why he has a bunker stocked with everything he might need to keep himself and his daughter, Cleo alive.
You see Dave has Asperger's and dealing with people is a problem. After Jana died, he moved himself and Cleo to a remote area in the hills of San Juan Capistrano where he can have more control. He knows that he has to let Cleo live her life but he doesn't need to like it. So when Cleo strikes a friendship with Edie, a new girl recently transferred from another school, Dave has to tolerate her.
Cleo is almost sixteen. She misses her mother terribly. Jana was not only her mom but her friend. She was able to tell her mother everything including her new feelings towards girls. Cleo knows of her father's Aspergers and she knows how to help him thanks to Jana. She is a very smart and thoughtful teenager. She seems mature for her age but life might have something to do with it. Meeting Edie has been the one positive she wasn't expecting.
I truly enjoyed Ways the World Could End. I liked that in the end, forgiveness was a big statement. I would say that the one thing that I wasn't too happy with was the way sometimes Dave came across. In some instances, he sounded selfish and robotic. Thankfully most of the time, he sounded like a worried dad grieving the loss of his wife.
Cliffhanger: No
4/5 Fangs
A complimentary copy was provided by Dreamscape Media via Netgalley in exchange for an honest review.
Posted by MrsLeif at 7:19 PM