The Book of Cold Cases by Simone St. James 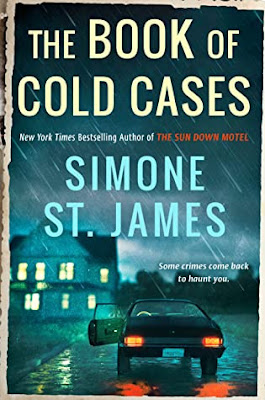 A true crime blogger gets more than she bargained for while interviewing the woman acquitted of two cold case slayings in this chilling new novel from the New York Times bestselling author of The Sun Down Motel.
In 1977, Claire Lake, Oregon, was shaken by the Lady Killer Murders: Two men, seemingly randomly, were murdered with the same gun, with strange notes left behind. Beth Greer was the perfect suspect--a rich, eccentric twenty-three-year-old woman, seen fleeing one of the crimes. But she was acquitted, and she retreated to the isolation of her mansion.
Oregon, 2017. Shea Collins is a receptionist, but by night, she runs a true crime website, the Book of Cold Cases--a passion fueled by the attempted abduction she escaped as a child. When she meets Beth by chance, Shea asks her for an interview. To Shea's surprise, Beth says yes.
They meet regularly at Beth's mansion, though Shea is never comfortable there. Items move when she's not looking, and she could swear she's seen a girl outside the window. The allure of learning the truth about the case from the smart, charming Beth is too much to resist, but even as they grow closer, Shea senses something isn't right. Is she making friends with a manipulative murderer, or are there other dangers lurking in the darkness of the Greer house?

The Sun Down Motel was spooky and The Book of Cold Cases is right up there too.
In 1977, rich, young and beautiful, Beth Greer is thought to be The Lady Killer. Two men have been shot dead. The killings seem to be random without a clear connection. Just after the second man is shot, a woman is seen leaving the scene of the crime. Beth Greer is taken for questioning and later on, she's accused of the murders. At the end of the trial, she is acquitted and is left living alone in her mansion for the next 40 years.
In 2017, Shea Collins runs a blog called The Book of Cold Cases. True Crime is her passion. Something happened to her when she was a child and now as an adult, this is what she does at night to keep her sanity. During the day, Shea is a receptionist at a doctor's office, and here is where she sees and recognizes Beth Greer.
After gaining some courage, Shea approaches Beth and asks if she would grant her an interview, and to her utter shock, Beth says yes on one condition, the interview has to be done at the mansion. After her first visit, Shea can tell something dark surrounds this place. She never wants to go back but can't she stay away?
Let me tell you, driving at night and listening to this book during the chilling parts was a new experience for me. It seemed like every time I got in the car, an eerie part was due.
I enjoyed both timelines. Learning more about Beth and her life made me feel very sorry for her. She got dealt a bad hand, that's for sure!
Shea's struggles also made me care for her. Watching her overcome some of them was gratifying. I was glad she had Winston Puurchill to help her out too.
I'm a fan of Simone St. James after these two books. Count me in for her next release.
Cliffhanger: No
4/5 Fangs
A complimentary copy was provided by Berkley via Netgalley in exchange for an honest review.
Posted by MrsLeif at 9:45 PM