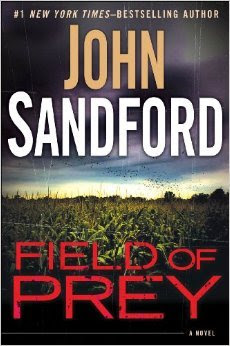 The night after the fourth of July, Layton Carlson Jr., of Red Wing, Minnesota, finally got lucky. And unlucky.
He’d picked the perfect spot to lose his virginity to his girlfriend, an abandoned farmyard in the middle of cornfields: nice, private, and quiet. The only problem was . . . something smelled bad—like, really bad. He mentioned it to a county deputy he knew, and when the cop took a look, he found a body stuffed down a cistern. And then another, and another.
By the time Lucas Davenport was called in, the police were up to fifteen bodies and counting. And as if that wasn’t bad enough, when Lucas began to investigate, he made some disturbing discoveries of his own. The victims had been killed over a great many years, one every summer, regular as clockwork. How could this have happened without anybody noticing?
Because one thing was for sure: the killer had to live close by. He was probably even someone they saw every day.

This one has a great build-up.
Like most of his other books in the Prey series, Sandford gives you the killer early on. So we know who had done it but Lucas has to connect all the dots in order to get to them before they kill again and by the end of Field of Prey, it is personal to Lucas.
The book begins with a couple of teenagers finding an area with a strong smell of death. The next day, the guy returns with a cop friend and they find a body. Soon where there was one, there are multiple dead women. The media finds out and the Black Hole Killer becomes the priority.
At first, Lucas is not completely involved but when another investigator is murdered, Lucas goes in 100%. In order to find the killers, he teams up with a local cop, Catrin Mattson who knows Virgil. It's a good combination.
The last part of Field of Prey has plenty of violence. It had my poor heart hammering. Time was running out for the next victim and Lucas needed to hurry up in a big way.
As always, I love the audio. Mr. Ferrone does a wonderful job at understanding and manifesting Lucas. I don't think I could listen to a book without his voice. He is Lucas to me.
I ended up liking Catrin a lot and I hope I can see her in other books. She deserves to be back.
I'm slowly catching up on this series and I already know that I will start the Virgil Flowers books next. If someone is a match for Lucas's personality, is Virgil.
Field of Prey is a winner. Between the humor, the sense of danger, and the amazing characterization, there is no way I wouldn't enjoy it.
Cliffhanger: No
5/5 Fangs