The Night Shift by Alex Finlay 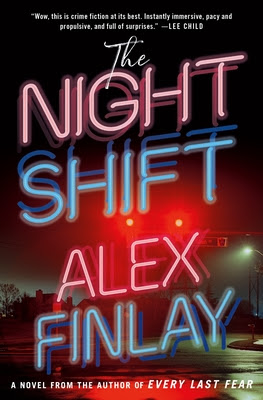 It’s New Year’s Eve 1999. Y2K is expected to end in chaos: planes falling from the sky, elevators plunging to earth, world markets collapsing. A digital apocalypse. None of that happens. But at a Blockbuster Video in Linden, New Jersey, four teenage girls working the night shift are attacked. Only one survives. Police quickly identify a suspect who flees and is never seen again.
Fifteen years later, in the same town, four teenage employees working late at an ice cream store are attacked, and again only one makes it out alive.
Both surviving victims recall the killer speaking only a few final words... “Goodnight, pretty girl.”
In the aftermath, three lives intersect: the survivor of the Blockbuster massacre who’s forced to relive her tragedy; the brother of the original suspect, who’s convinced the police have it wrong; and the FBI agent, who’s determined to solve both cases. On a collision course toward the truth, all three lives will forever be changed, and not everyone will make it out alive.
Twisty, poignant, and redemptive, The Night Shift is a story about the legacy of trauma and how the broken can come out on the other side, and it solidifies Alex Finlay as one of the new leading voices in the world of thrillers.

After reading Every Last Fear last year and not being able to forget the Pines, I requested this book in a nanosecond when it was available.
The Night Shift has 4 main characters:
Ella is the sole survivor of the Blookbluster attack. Ella was a teenager working at Blockbuster on 1999's New Year's Eve. Everyone else was worried about Y2K but the teenagers working with her were just putting the videos away (Be Kind and Rewind, anyone?) and ready to go home when at closing time, someone enters the store and murders them. The only thing Ella recalls is a shadow leaning forward and whispering "Goodnight, pretty girl". Ella is now a therapist but with demons of her own. She uses little blue pills and sleeps around despite having a fiancee.
Chris Whitaker is a public defender. He is the brother of the assumed Blockbuster killer. He knows his brother is innocent and would like to prove it but he is not sure where his brother is. He disappeared after the murders.
Fifteen years later, after the Blockbuster attack, Jessica Duvall, a high school teenager, is the sole survivor of the Ice Cream murders. Ella is called to the hospital to help her after the traumatic experience. Ella's blood freezes when Jessica tells her that the only thing she remembers is the perp saying "Goodnight, pretty girl".
And my favorite character, FBI Agent Keller. She was part of the first book and in this one, she is pregnant with twins ready for delivery when she is asked to check if there is a relationship between both murders. She is assigned a temporary partner, Atticus Singh. Together, they would go back and question everyone who was involved during the 1999 attack. They would retrace the steps and try to find a link.
Alex Finlay is a master at getting these characters to interconnect. We get to get surprised by certain events and twists that were not jaw-dropping but that were interesting nonetheless making the story more believable.
Although, I would say the killer is not a mystery. You can tell who he/she is from the get-go which only made me worried for the innocent ones.
With this sophomore book, Alex Finlay solidifies my conviction that he is a must-read for me.
Cliffhanger: No
4/5 Fangs
A complimentary copy was provided by Minotaur Books via Netgalley in exchange for an honest review.
Posted by MrsLeif at 6:15 PM