The Accomplice by Lisa Lutz 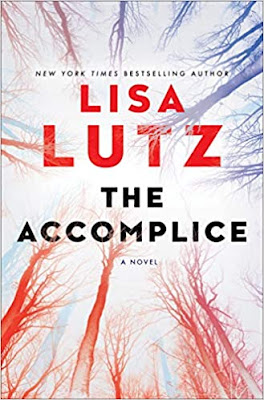 Everyone has the same questions about best friends Owen and Luna: What binds them together so tightly? Why weren't they ever a couple? And why do people around them keep turning up dead? In this riveting novel from the New York Times bestselling author of The Passenger, every answer raises a new, more chilling question.
Owen Mann is charming, privileged, and chronically dissatisfied. Luna Grey is secretive, cautious, and pragmatic. Despite their differences, they begin forming a bond the moment they meet in college. Their names soon become indivisible--Owen and Luna, Luna and Owen--and stay that way even after an unexplained death rocks their social circle.
Years later, they're still best friends when Luna finds Owen's wife brutally murdered. The police investigation sheds some light on long-hidden secrets, but it can't penetrate the wall of mystery that surrounds Owen. To get to the heart of what happened and why, Luna has to dig up the one secret she's spent her whole life burying.
The Accomplice examines the bonds of shared history, what it costs to break them, and what happens when you start wondering if you ever truly knew the only person who truly knows you.

The Accomplice is a good thriller from the very beginning.
Luna Grey and Owen Mann have been friends since college. The friendship was an unexpected one. The popular guy and the secretive girl. Yes, Luna's secret is a big one. One that not even Owen knows.
Then Owen's ex-girlfriend is found dead in a hiking path and suspicion lies on Owen alone.
In the present, Owen and Luna are still best buddies. Owen is married to Irene and Luna lives just a few houses from him. Luna is also married although she doesn't seem to be happy. When Luna finds out Owen is cheating and she learns this from Irene herself, she meets Owen to make sure he knows his wife knows.
The next day, Irene is found dead, shot in the cemetery, and guess who finds her? Luna. What does Luna do? She runs to tell Owen instead of calling the cops.
Did Owen kill Irene and if yes, does this mean he killed his ex-girlfriend in college too? Has Luna been wrong about Owen all this time? Can she live with herself if this is true?
The Accomplice was an entertaining novel that kept me guessing until the end. Up to the last part, it was a four for me but the ending let me down. After all the build-up, it was missing the "awe" conclusion it needed.
Cliffhanger: No
3/5 Fangs
A complimentary copy was provided by Ballantine Books via Netgalley in exchange for an honest review.
Posted by MrsLeif at 5:58 PM