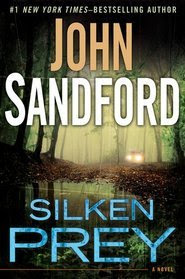 Very early one morning, a Minnesota political fixer answers his doorbell. The next thing he knows, he’s waking up on the floor of a moving car, lying on a plastic sheet, his body wet with blood. When the car stops, a voice says, “Hey, I think he’s breathing,” and another voice says, “Yeah? Give me the bat.” And that’s the last thing he knows.
Davenport is investigating another case when the trail leads to the man’s disappearance, then—very troublingly—to the Minneapolis police department, then—most troublingly of all—to a woman who could give Machiavelli lessons. She has very definite ideas about the way the world should work, and the money, ruthlessness, and sheer will to make it happen.
No matter who gets in the way.

This series just keeps on giving. Giving me anxiety that is.
Is Lucas going to be hurt? Not again, please!
Is he going to lose his job? I think so. Plenty of foreshadowing.
Is he going to find the killers on time? I sure hope so.
Lucas Davenport, BCA agent receives a call from the Governor of Minnesota. The next race for Senate is about to be over and the democratic candidate is probably going to win it after child porn is found on the computer of Republican Senator Porter Smalls. The Governor who knows Smalls personally believes that Porter is not lying when he says that the porn was not his, hence the call to Lucas. He wants him to dig around and find out if there is the possibility of someone framing Smalls.
Lucas knows that involving his usual team could backfire if he gets in trouble and he knows if he loses his job, he will be ok but doesn't want the rest of them to lose theirs. He turns for help to Kidd (known to us from prior books) and Virgil Flowers instead. Kidd will help with the IT support part of the investigation. Lucas didn't realize the spectrum of Kidd's knowledge when the novel starts. It's hard to surprise Lucas but Kidd has done it.
Lucas's investigation starts pointing to Democrat candidate Taryn Grant's campaign. Taryn is a billionaire who seems to have it all. She has her eyes set on a Senate seat and no one or nothing is going to stop her. She is a narcissist who is smart, cunning, and influential. Lucas is not sure how to prove that Taryn knew about the porn and the murders. Is she innocent then?
A great addition to the series. I love Kidd and his wife Lauren who has her own side story in this one. I always like seeing Flowers in the Prey books. They have great banter and even though I haven't read the Flowers series, I know I'm going to like him in it.
My only disappointment is that I feel this is the third or fourth book when someone gets ways with a bad deed without punishment. And if we are going to let baddies get away with it, why couldn't Clara Rinker be one of them?
Cliffhanger: No
4/5 Fangs