Under the Whispering Door by T.J. Klune 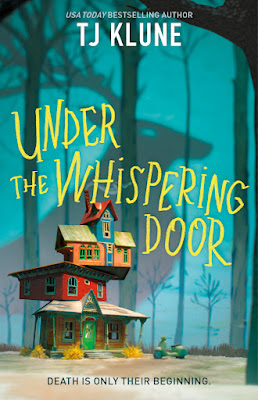 When a reaper comes to collect Wallace Price from his own funeral, Wallace suspects he really might be dead.
Instead of leading him directly to the afterlife, the reaper takes him to a small village. On the outskirts, off the path through the woods, tucked between mountains, is a particular tea shop, run by a man named Hugo. Hugo is the tea shop's owner to locals and the ferryman to souls who need to cross over.
But Wallace isn't ready to abandon the life he barely lived. With Hugo's help he finally starts to learn about all the things he missed in life.
When the Manager, a curious and powerful being, arrives at the tea shop and gives Wallace one week to cross over, Wallace sets about living a lifetime in seven days

Is not a secret that I absolutely loved The House in the Cerulean Sea. It made me a fan of T.J. Klune. So of course I was going to read his next book.
Under the Whispering Door had me at Apollo. Who doesn't like a ghost dog that is always happy to see you and lick you to death? (no pun intended)
Ok, maybe it had me at more. Quirky characters, a tea shop, a love story, and learning the lesson to be a better person and to enjoy life while you can. These are all things I took away from the story.
Wallace Price is a ruthless lawyer. When the book begins he is firing an employee who is already in an economic bind. For Wallace, the only thing that matters is his job. He spends enough hours to know this is what gives him satisfaction. His marriage failed because his priority was his job. So when Wallace suffers a heart attack and dies, no one is more shocked than him. Shocked and angry that is.
Wallace meets his reaper first, Mei at his own funeral. She is there to take him to the Ferryman who would help Wallace understand what is happening to him and then guided him to the next step. When they arrived at Charon's Crossing Tea and Treats, Wallace meets Hugo, the Ferryman, the ghost of Hugo's grandfather, Nelson, and Hugo's ghost dog, Apollo.
As the days progress, Wallace goes through similar stages of grief and he begins to understand and assimilate that he is dead. Then, the Manager shows up and gives him 7 more days before crossing and Wallace sets himself to right some wrongs before it's too late.
I listened to the audio which was fantastic. The narrator Kirt Graves does an amazing job at separating all the characters and making them fun to listen to. It made it so smooth and clear. Never doubting which "voice" was talking.
As I said earlier, Under the Whispering Door was charming and quirky in the most endearing way!
Cliffhanger: No
4/5 Fangs
A complimentary copy was provided by Tor Books via Netgalley in exchange for an honest review.
Posted by MrsLeif at 4:00 PM