I Don't Forgive You by Aggie Blum Thompson 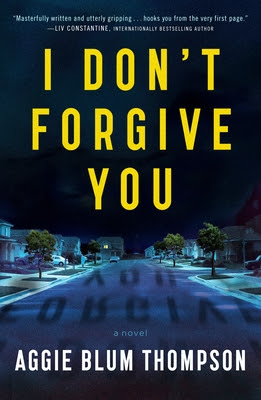 An accomplished photographer and the devoted mom of an adorable little boy, Allie Ross has just moved to an upscale DC suburb, the kind of place where parenting feels like a competitive sport. Allie's desperate to make a good first impression. When she's framed for murder.
It all starts at a neighborhood party when a local dad corners Allie and calls her by an old, forgotten nickname from her dark past. The next day, he is found dead.
Soon, the police are knocking at her door, grilling her about a supposed Tinder relationship with the man, and pulling up texts between them. She learns quickly that she's been hacked and someone is impersonating her online. Her reputation--socially and professionally--is at stake; even her husband starts to doubt her. As the killer closes in, Allie must reach back into a past she vowed to forget to learn the shocking truth of who is destroying her life.

I liked this one!
The whodunit was always in the back of my mind. Who was torturing Allie? I knew why, but I wasn't sure who.
Allie Ross was living a suburban life. Her husband Mark, an attorney, has started a new job and they have moved to DC. Her six-year-old son is in a good school and Allie is moving in the right direction as a photographer with the hope of starting her own studio in the near future.
Allie and her husband are invited to a neighborhood party where Allie flirts a little with a man until he calls her by a nickname (Lexie) that she hasn't heard in many years. Then the same man follows her up into a bathroom and tries to have sex with her. She is shocked and is able to escape him but not without her husband noticing something was not right. After taking a shower, Allie only wants to forget the weird encounter.
The next morning, the neighborhood is uproar. A man has been found dead. The man is none other than the same man that accosted Allie in the bathroom. Then, detectives come on knocking and they want to know more about her Tinder app. An app she never downloaded herself despite showing up on her phone.
The more confusing and damaging her life becomes, the more Allie questions who is behind this vendetta and why?
Quite entertaining from beginning to end. I couldn't stop reading it!
Allie was likable and I could feel how desperate she was becoming. I wasn't really happy with the way her husband Mark took things and his lack of support when she needed it but I guess it worked in isolating her even further.
I Don't Forgive You had me guessing to the end which is my favorite type of book.
I know that when Aggie Blum Thompson writes another novel, I won't hesitate to read it.
Cliffhanger: No
4/5 Fangs
A complimentary copy was provided by Forge Books via Netgalley in exchange for an honest review.
Posted by MrsLeif at 4:08 PM