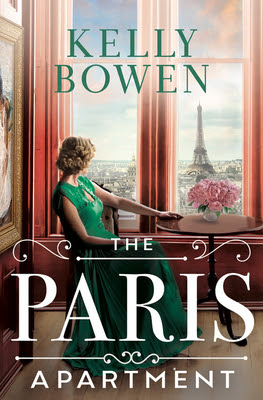 A heart-wrenching novel that unearths generations of secrets and sacrifices -- perfect for fans of The Paris Orphan and The Lost Girls of Paris.
When a woman inherits a Parisian apartment undisturbed since WWII, she discovers that it may hold the key to unraveling her cold and distant great-grandmother's secret life -- a past of sacrifice during a mission to protect those she loved.

I'm always attracted to books set during WW2. I think it's because it was such a terrible period for humanity but despite it all, there were always people fighting for freedom and justice. So much courage!
As soon as I saw The Paris Apartment, I knew I wanted to read it.
Lia's grandmother has passed away and she has left her an apartment in Paris. An apartment no one knew she had!
When Lia opens the door to the apartment, the only way to describe it would be a time capsule from the 1940s. The walls are filled with paintings that probably cost a fortune. The closet is filled with couture garments but the most shocking thing is the nazi propaganda left behind. Lia wonders if her grandmother was a nazi collaborator.
Lia is determined to find out more. She will go in search of true ownership of the paintings and she will enlist the help of Gabriel, an art appraiser.
Estelle is Lia's grandmother. Her story will be told in the 1940s. During those chapters, we learned what Estelle was really doing during the Nazi occupation of France, her visits to the Ritz, and her relationship with Sophie, a woman who looks like an ice princess and whose sole purpose left in life is to help bring the nazis down.
The Paris Apartment is a satisfying story of determination and strength. The dual timelines worked very well in this novel. Both were engaging although, Estelle's was way more unnerving for me despite knowing she lived a long life.
Cliffhanger: No
4/5 Fangs
A complimentary copy was provided by Forever via Netgalley in exchange for an honest review.
Posted by MrsLeif at 9:23 PM