The Last House on Needless Street by Catriona Ward 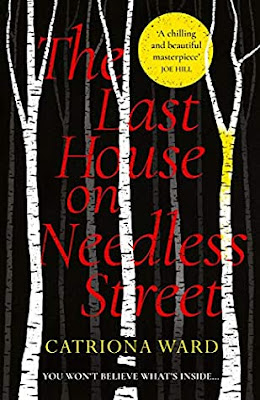 This is the story of a serial killer. A stolen child. Revenge. Death. And an ordinary house at the end of an ordinary street.
All these things are true. And yet they are all lies...
You think you know what's inside the last house on Needless Street. You think you've read this story before. That's where you're wrong.
In the dark forest at the end of Needless Street, lies something buried. But it's not what you think...

Ted is a loner. He lives in Needless Street and avoids his neighbors. His only companions are his cat, Olivia, and his daughter Lauren who comes for short visits too.
Ted's parents are both gone and his childhood home is now his house. He tries to maintain the upkeep of his property but he doesn't do a very good job. When he was a kid he used to go to school but he never really developed close friendships. His mother was a nurse and she took care of him after his father left.
Ted became a recluse when his face was in the newspapers. His face was associated with the disappearance of a young girl. She disappeared near the lake and her body was never found. People said Ted had an alibi, but the girl's sister, Dee is not too sure.
Is Ted the monster who took Lulu? Did Ted kill her? If so, can Dee find out the truth?
You would have to read (or listen to it like I did) this book to know what really happens.
Yes, this book is unconventional. Olivia, the cat, has her own chapters which might dissuade some readers. I will say, persevere, IT'S WORTH IT. Furthermore, I think Olivia became my favorite character.
The audio was superb and the narrator did a wonderful job at interpreting each character and their own turmoil.
Cliffhanger: No
4/5 Fangs
A complimentary copy was provided by Macmillan Audio/Macmillan-Tor/Forge via Netgalley in exchange for an honest review.
Posted by MrsLeif at 9:54 PM