The ​Crown of Gilded Bones
by Jennifer L. Armentrout
Blood and Ash #3 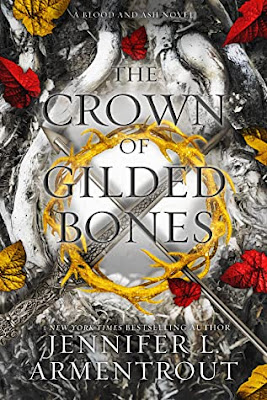 She's been the victim and the survivor…
Poppy never dreamed she would find the love she’s found with Prince Casteel. She wants to revel in her happiness but first they must free his brother and find hers. It’s a dangerous mission and one with far-reaching consequences neither dreamed of. Because Poppy is the Chosen, the Blessed. The true ruler of Atlantia. She carries the blood of the King of Gods within her. By right the crown and the kingdom are hers.
The enemy and the warrior…
Poppy has only ever wanted to control her own life, not the lives of others, but now she must choose to either forsake her birthright or seize the gilded crown and become the Queen of Flesh and Fire. But as the kingdoms’ dark sins and blood-drenched secrets finally unravel, a long-forgotten power rises to pose a genuine threat. And they will stop at nothing to ensure that the crown never sits upon Poppy’s head.
A lover and heartmate…
But the greatest threat to them and to Atlantia is what awaits in the far west, where the Queen of Blood and Ash has her own plans, ones she has waited hundreds of years to carry out. Poppy and Casteel must consider the impossible—travel to the Lands of the Gods and wake the King himself. And as shocking secrets and the harshest betrayals come to light, and enemies emerge to threaten everything Poppy and Casteel have fought for, they will discover just how far they are willing to go for their people—and each other.
And now she will become Queen…

Well, that was exciting!
I can not wait for the next book. I thought it was a trilogy and now I learned there are going to be six books!
I do hope the next book is the end for our main couple and maybe there is room for other characters to find happiness (*cough - Kieran - cough*) or not. Whatever, JLA decides, I'm still going to be reading it.
So, we were left with a huge cliffhanger on the second book and The Crown of Gilded Bones begins right after.
The first few chapters were action-packed and I devoured them or maybe I should say, I sped my audiobook to a speed I have not gone to before. Anyway, it was so worth the wait.
Poppy is in the hot seat. She will have to make a choice, become Queen of her own free will and help Atlantia or walk away. As the reader we know, she will never walk away from her responsibility but it was nice that for once she was not forced into something.
Poppy has started to realize that she needs to stand up for herself and that she will always have the support of Cas and Kieran.
Now, the middle of the book did slow down for me (despite the speed). Would I call it boring? Not really but I felt like there was not much to it. Then the last part is heartstopping with its greatness and let me tell you, if you are a writer and you need your audience to keep on reading your series, THIS IS THE WAY TO MAKE IT HAPPEN!
What a perfect last scene!
So many positives in this series. Poppy and Cas complement each other well. Kieran is so cool that I wish I could be friends with his wolf. I want a HEA for him too (with Tawny, please!). I love the mythology surrounding this series and I welcome the action I know JLA will bring.
The only thing left to say is: I don't want to wait and I hope we get the next book this year. We need some happiness after 2020.
Cliffhanger: No
4/5 Fangs
Posted by MrsLeif at 9:28 PM