The Slow Burn of Silence by Loreth Anne White 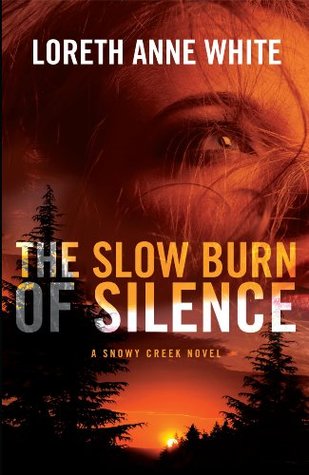 From the crossroads of small town mystery and dark suspense comes a romance that explores the bonds of family, the power of love, and the potentially explosive collateral damage of the secrets we keep... Sometimes a contract to forget can be as powerful as a promise to remember...
---
An ex-con, wrongfully convicted of a heinous crime, returns to a small mountain town determined to prove his innocence, reclaim the heart of the woman who helped put him behind bars, and win back the right to meet the daughter he learned about in prison. But his arrival stirs up dark secrets and re-ignites a fierce and consuming passion that just might get the woman he loves, and his child, killed.
---
Nine years ago Rachel Salonen and Jeb Cullen were soul mates--deeply, irrevocably in love. Until the night two young women went missing from a party in the woods. One was found raped, beaten and pregnant with no memory of what happened. The other is still missing. A small mountain community was torn apart and a young relationship shattered when nineteen-year-old Jeb was arrested for the heinous crime, and Rachel was forced to help put the man she loved behind bars. Now, nine years later, Rachel believes she's finally put the past to rest when her sister dies suddenly in a fire and she's made guardian of her adopted niece. A child, she learns, who was conceived that terrible night of violence, a child whose DNA was used to convict Jeb. And when Jeb is unexpectedly released from max security, Rachel sees that the past has only just begun... ... Because Jeb has come straight home to Snowy Creek. To prove his innocence, reclaim his life, his home. And to meet the daughter he learned about in prison. A daughter Rachel will do anything to protect. And when the town turns violently on Jeb, Rachel will once again be forced to take sides. This time she chooses with her heart. But her decision could cost everything she holds dear--including her niece's life. Because someone in town will do anything to keep the truth buried...even kill.

Nine Years ago, Jeb Cullen went to prison for the rape of one woman and the disappearance of another one. The survivor lost her memory of the events during the attack but she became pregnant with his child, Quinn. Jeb always claimed he was innocent. He admitted he had a consensual sexual encounter with Amy Findlay but he remembers driving Amy and her friend, Merilee Zukanov in his car to an intersection, and then the women asked him to let them out, which he was happy to do. He remembers driving away,  getting to his house and then crashing on his bed until the next day.

Jeb's girlfriend at that time, Rachel Salonen, didn't believe him. She and the testimony of four other men sealed Jeb's future. He was sent to prison. Now, Jeb has been let go on a technicality and he's back in Snowy Creek to set the record straight. He wants his daughter back and to get her, he needs to prove his innocence. He knows those four men lied but he doesn't know why. He's back to rattle some cages and get to the bottom of the events that occurred during that awful night.

As a fan of Loreth Anne White, I might be biased but I thought The Slow Burn of Silence was just one huge success. From the very beginning to the last page, this reader couldn't get enough. There was so much suspense and you never knew who was going to attack next. In the last few chapters, it was aa delight to see all the dominoes falling.

Of note, even though, this book says it's a part of a series, I could only find one. I wonder if she's ever going to revisit some of the characters who were left in this one. I believe she has plenty of material to go back and write about Annie Pirello.