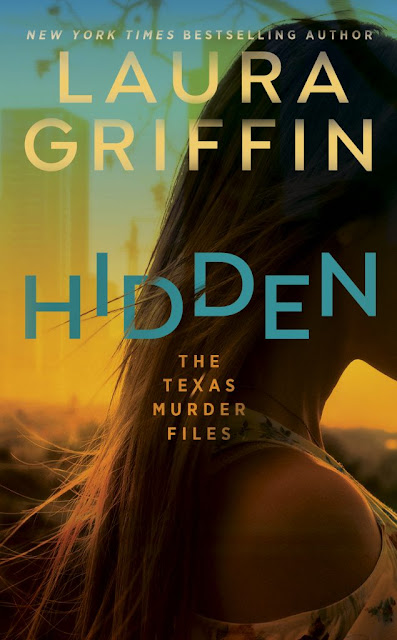 When a woman is found brutally murdered on Austin's lakeside hike-and-bike trail, investigative reporter Bailey Rhoads turns up on the scene demanding access and answers. She tries to pry information out of the lead detective, Jacob Merritt. But this case is unlike any he's ever seen, and nothing adds up.

Bailey has a hunch the victim wasn't who she claimed to be and believes this mugging-turned-murder could have been a targeted hit. When she digs deeper, the trail leads her to a high-tech fortress on the outskirts of Austin where researchers are pushing the boundaries of a cutting-edge technology that could be deadly in the wrong hands.

As a ruthless hit man's mission becomes clear, Bailey and Jacob must embark on a desperate search to locate the next target before the clock ticks down on this lethal game of hide and seek.

When I saw an email from Berkley with an early copy of Hidden, I couldn't jump fast enough to request it. Laura' Griffin is one of my favorite writers. I'm a fan for sure but I wasn't aware she was beginning a new series. Imagine my happiness at learning this fact!

The Texas Murder Files first book is Hidden. It stars a young journalist, Bailey Rhoads and a detective, Jacob Merritt. Usually, this combo doesn't mix well in real life but Laura makes it work in spades in this romantic suspense.

The story begins with a woman jogging in a park and then getting stabbed to death. The problem is that Dana Smith doesn't really exist. She has no friends, no family, and her employer, a doctor who hired her as a nanny, doesn't know anything more about her than what the cops do.

Hidden is an interesting novel with great characterization. I loved Bailey. She was smart, resourceful and stubborn- in a good way. She knew the murder had to have another angle and she was willing to dig and put herself on the line to find it. She wouldn't let go of the story and she wanted to bring justice to the dead woman.

Jacob was the perfect complement to Bailey. He was strong, dedicated and he cared for the victims. Also, he was as stubborn as Bailey in not letting go of the case as she was. He wanted the person responsible for Dana's death behind bars.

Jacob's partner, detective  Kendra Porter was very cool too. She was essential to the investigation and when she could've been catty, she wasn't. She piqued my interest and I want to learn more about her.

Lastly, John Colt's character. He was so mysterious about himself which only made me want to know everything about him. I hope this is not the end of John. He deserves his own story.

As a whole, I was pleased with the way Hidden developed. I'm already pumped to read her next work in this series but really any book by Laura Griffin is a winner in my book.

A complimentary copy was provided by Berkley via Netgalley in exchange for an honest review.
Posted by MrsLeif at 8:03 PM