The Happy Ever After Playlist by Abby Jimenez 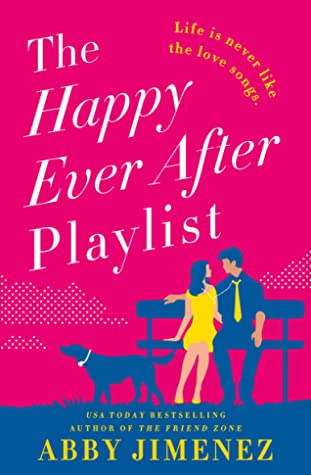 From the USA Today bestselling author of The Friend Zone comes an adorable and fresh romantic comedy about one trouble-making dog who brings together two perfect strangers.

Two years after losing her fiancé, Sloan Monroe still can't seem to get her life back on track. But one trouble-making pup with a "take me home" look in his eyes is about to change everything. With her new pet by her side, Sloan finally starts to feel more like herself. Then, after weeks of unanswered texts, Tucker's owner reaches out. He's a musician on tour in Australia. And bottom line: He wants Tucker back.

Well, Sloan's not about to give up her dog without a fight. But what if this Jason guy really loves Tucker? As their flirty texts turn into long calls, Sloan can't deny a connection. Jason is hot and nice and funny. There's no telling what could happen when they meet in person. The question is: With his music career on the rise, how long will Jason really stick around? And is it possible for Sloan to survive another heartbreak?

It's not a secret that The Friend Zone was one of my favorite books of 2019.  It was such a good story that I thought how can Abby Jimenez top that? This was the main reason why I had reservations about reading The Happy Ever After Playlist. I was so worried it was not going to meet or surpass my expectations.

It turns out, I didn't need to worry. I ended up loving it. The ending is now on the list of my favorite endings of all time. While I was reading it, I was a mess. I cried, I laughed. I might even have applauded (a little bit).

The Happy Ever After Playlist begins with Sloan, Kristen's friend from The Friend Zone, finding a  lost dog by the name of Tucker. During the next few days, Sloan tries to find his owner. She leaves voicemail after voicemail until she gives up and decides to keep the dog. Then, Jason, Tucker's owner who has been in Australia, returns her calls and begs her to give him his dog back. At first, Sloan is not too sure he can be trusted but Jason explains he's a singer and has been away for a while and he left his dog with someone he thought he could count on. This conversation leads to more phone calls and texts between these characters for the next few days which leads to AMAZING banter!

Between Tucker and Jason's presence, Sloan begins to awaken from her two-year grief. A grief so deep she had become a shell of the woman she used to be. As Sloan starts feeling better and maybe thinking a relationship with Jason could work, his fame explodes and in order to stay together, hard choices have to be taken or even harder ones to stay apart.

I love so much the banter Sloan and Jason had. They had chemistry out the wazoo. Both characters were likable and I was rooting for their happy ever after (playlist). Yes, there was a part I wasn't too happy about but I understand why it happened. It did lead to the resolution of the conflict which was a pure MAGICAL moment (this is probably where I started clapping).

In regards to Sloan's interaction with Kristen, it was absolutely refreshing. Two best friends who lift each other up (and not down for a change). Their antics had me in stitches. Also, getting a glimpse of Kristen and Josh's happiness was a fantastic treat for this reader.

I hope Abby Jimenez brings a third book as amazing as this one soon.