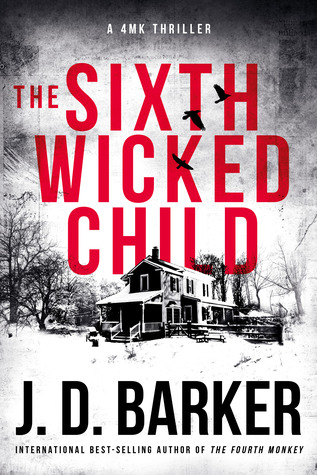 In the riveting conclusion of the 4MK trilogy, Barker takes the thriller to an entirely new level. Don't miss a single word of the series James Patterson called "ingenious."

For Detective Sam Porter, the words “Father, forgive me” conjure memories long forgotten; a past intentionally buried. For Anson Bishop, these three words connect a childhood to the present as he unleashes a truth concealed for decades.

Found written on cardboard near each body, these words link multiple victims to a single killer—discovered within minutes of each other in both Chicago and South Carolina—clearly connected yet separated by impossible miles.

Chicago Metro and the FBI find themselves caught in chaos—a hospital on lockdown, a rogue officer, and corruption at the highest levels. When Anson Bishop, the prime suspect in the notorious 4MK serial murders turns himself in, he reveals a story completely unexpected, one that not only upends the current investigation but one that will change the lives of all involved.

With unrelenting tension and pulse-pounding suspense, the past unravels at breakneck speed as the truth behind the Four Monkey Killer’s motive is finally revealed in this masterfully crafted finale.

This series has ended with a BANG!

The ending was priceless and memorable.

I can tell you, I think this author is a master of deceit. I was sure who the bad guy was and then poof, I was wrong and then the guy I thought was a good one, was not. Or wait, maybe the bad guy was the bad guy after all or ....so u see my point. A complete mind play.

J. D. Baker does such a fantastic job in this series.  The suspense and the writing were phenomenal. At some point, he had me rooting for Anson. A total psychopath but whom I wanted some type of happiness after everything he had to endure. It helps that we get glimpses of Anson as a teenager and the crush he had on Libby helped humanize him for me.

Sam Porter, what can I say? He was a very interesting character. I liked him from the very beginning of the 4MK series. Smart, likable, a nice boss with great powers of deduction. He was still mourning the loss of the only woman he had ever loved. In the Sixth Wicked Child, he gets himself into a corner. He's in deep trouble and I wasn’t sure I could or should trust him.

The secondary characters like Clair, Nash, Agent Poole and Kloz were all very well-developed. They complemented Anson and Sam's in every way possible.

I don't think I want to say anything else because a lot of it could be spoilers.

Thank you so much Hampton Creek Press for my free digital copy of The Sixth Wicked Child.