The Girl on the Porch by Richard Chizmar 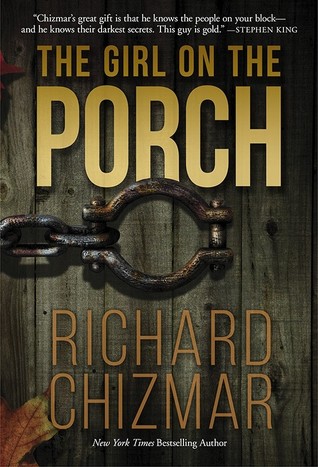 From New York Times bestseller Richard Chizmar, author of Gwendy's Button Box (with Stephen King) and The Long Way Home, comes a thriller that will forever change the way you look at your neighbors and best friends...

When the Tuckers’ next door neighbor mentions someone rang their doorbell late the previous night, Sarah and Kenny Tucker check their home’s security camera and discover something shocking: the doorbell ringer also visited their house and it wasn’t a teenager playing a prank, but instead a terrified young woman with a shackle hanging from her right wrist. She anxiously pressed the doorbell again and again, glancing over her shoulder as if someone was coming for her, before giving up and taking off into the dark.

Almost overnight, she becomes known as The Girl on the Porch—and she’s everywhere. There are updates on all the local networks, national coverage on CNN and Fox News, and the video goes viral on social media. Before long, everyone has seen the harrowing security camera footage.

Kenny and Sarah figure it’s only a matter of time before someone recognizes the woman, but as the days pass and no one comes forward, odd things begin to transpire around the Tucker family: a man intensely watches them at a restaurant and then vanishes, fresh footprints appear in the garden next to their house where no one should have been, a neighbor’s pet is viciously killed and mutilated, and a mysterious man has started following their daughter Natalie...

What a great beginning this novella had!

Imagine reviewing your outside front door camera footage (not uncommon in the age of the Ring and the Nest) the morning after hearing your next-door neighbor's dog barking in the middle of the night and seeing an almost naked woman with a shackle hanging from her wrist banging on your door trying to get someone to help her. This is exactly what happened to Sarah and Kenny Tucker.

After the shock, the couple calls the police. Of course, the police immediately wants to know if Kenny knows the woman. Kenny denies it. Soon the news gets ahold of the story and the video goes viral. Everyone wants to know who this woman is and where is she. For the police, anyone in the neighborhood is a suspect including Kenny.

Like I said earlier, great beginning. The novella has a fast-paced and suspenseful narrative. It was hard to pinpoint who had taken this woman. Despite Sarah and Kenny having a good marriage, Sarah couldn't be sure Kenny didn't have something to do with her appearance and for that matter, her disappearance.

The Girl on the Porch was intriguing with good characters but the end failed to woo me. It was disappointing. It was choppy and incongruent with the rest of the book. Everything happened so fast. I felt like there could've been a whole chapter cluing us in and leading us into that ending. Otherwise, it made no sense. Quite a shame because it had a great promise.

A complimentary copy was provided by Subterranean Press via Netgalley in exchange for an honest review.
Posted by MrsLeif at 9:24 PM