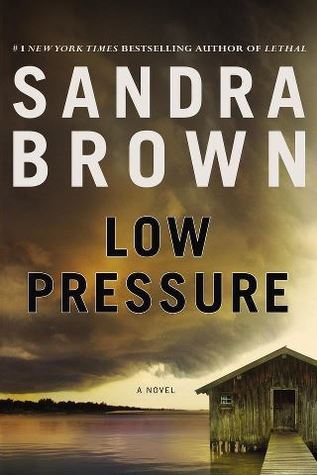 Bellamy Lyston Price was only 12 years old when her older sister Susan was killed on a stormy Memorial Day. Bellamy's fear of storms is a legacy of the tornado that destroyed the crime scene as well as her memory of one vital fact that still eludes her...

Now, 18 years later, Bellamy has written a novel based on Susan's murder. It's her first book, and it's an instant sensation. But because the novel is based on the most traumatic event of her life, she's published it under a pseudonym to protect herself and her family.

But when a sleazy reporter for a tabloid newspaper discovers that the book is based on a real crime, Bellamy's identity - and dark family secrets -- are exposed. Suddenly, she finds herself embroiled in a personal conflict and at the mercy of her sister's killer, who for almost two decades has gotten away with murder...and will stop at nothing to keep it that way.

As a huge, Sandra Brown's fan, I'm committed to trying to read all of her books. Every time I have downtime, or I had read a few books that didn't cut it for me, I revert back to something I know I'm going to enjoy.

Low Pressure is full of suspense, romance, intrigue and great plot twists which is not unusual for Mrs. Brown's arsenal of amazing books.

From the first chapter, I knew it was going to be a good one.

Bellamy Lyston Price has written a novel about a murder. She has based her book, Low Pressure on a real-life event, her sister Susan's murder. When Bellany was twelve, during a Memorial day festivity, a tornado hit their party and soon after, her sister was found murdered.

Susan's boyfriend at the time, Denton Carter was the prime suspect. Yet, Dent denied ever being around the park and he had a firm alibi. He was flying a plane with his soon to be boss, Gall Hathaway.

Susan's family, her father, Howard (who is dying of cancer), her step-mother, Olivia and her step-brother, Steven are very unhappy about the book. Susan's murder affected all of them eighteen years ago and having the wound opened again is hurting them now. It doesn't help that Rocky Van Durbin, a sensationalist reporter won't let the matter go. Furthermore, there are many others who are unhappy with what Low Pressure has stirred, Dale Moody was the cop who investigated the murder, Rupe Collier was the DA at the time and Ray Strickland is obsessed with hurting Bellamy and Dent since his brother was the one who paid for Susan's murder when Ray is sure his brother was innocent.

Low Pressure is another winner. I loved the audio as much as the Kindle. As always, the characters are well-developed and the storyline is an interesting one. I didn't love Denton as much as I've loved the other male characters. I did like Bellamy a lot.

I can't wait to read another book by this great author.