Forget You Know Me by Jessica Strawser 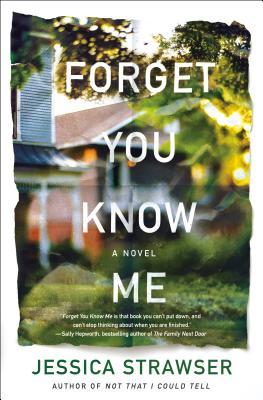 The next “masterful” (Publishers Weekly) novel from "the gifted Jessica Strawser" (Adriana Trigiani), hailed as “immensely satisfying” (Kathleen Barber) and “that book you can’t put down” (Sally Hepworth). A video call between friends captures a shocking incident no one was supposed to see.
The secrets it exposes threaten to change their lives forever.
Molly and Liza have always been enviably close. Even after Molly married Daniel, the couple considered Liza an honorary family member. But after Liza moved away, things grew more strained than anyone wanted to admit—in the friendship and the marriage.
When Daniel goes away on business, Molly and Liza plan to reconnect with a nice long video chat after the kids are in bed. But then Molly leaves the room to check on a crying child.
What Liza sees next will change everything.
Only one thing is certain: Molly needs her. Liza drives all night to be at Molly’s side—but when she arrives, the reception is icy, leaving Liza baffled and hurt. She knows there’s no denying what she saw.
Or is there?
In disbelief that their friendship could really be over, Liza is unaware she’s about to have a near miss of her own.
And Molly, refusing to deal with what’s happened, won’t turn to Daniel, either.
But none of them can go on pretending. Not after this.
Forget You Know Me is a “twisty, emotionally complex, powder keg of a tale” (bestselling author Emily Carpenter) about the wounds of people who’ve grown apart. Best friends, separated by miles. Spouses, hardened by neglect. A mother, isolated by pain.
One moment will change things for them all.

Forget You Know Me is the tale of two longtime friends, what drove them apart and what brings them together.

Molly is a mother and a wife. She's also someone who has been dealing with chronic pain for a long time. This has affected her relationship with her husband and her son. She's a good friend to her neighbor and his child but has grown apart from her husband. She can't remember when was the last time they enjoyed a nice day together. She has also has grown apart from her best friend Liza.

Liza used to live in Cincinnati and be there for Molly but when she moved to Chicago, everything changed. Liza found a new best friend but she doesn't want to end her friendship with Molly, so she plans a Skype call with her, their version of a virtual lady's night. When Molly is called by her son and leaves the room, Liza is a witness to a nightmare. A masked man is in the house with Molly and her son. Liza calls the police, tries to contact Molly but when her answer is a simple text, she can't sleep and decides to drive back to Cincinnati to find out if Molly is ok. The reception she receives when she arrives at Molly's house is not what she was expecting.

Due to unexpected events, Liza finds herself leaving Chicago and moves in with her brother and his wife. They are dealing with their own problems and Liza wants to help them any way she can. She starts a new job in Cincinnati where she meets Henry, a pilot whom she starts a relationship with. Lastly, now that she is back in the city, she can patch her friendship with Molly if it is still salvageable.

Forget You Know Me is a woman's fiction novel. It deals with friendship, the relationship between mother and child, chronic pain and marriage. I enjoyed it but I didn't love it as much as I have her other two novels. I liked both female characters. Herny was lovable but Daniel was tougher to like.

Thank you St. Martin's Press and NetGalley for providing me with a complimentary copy in exchange for an honest review.