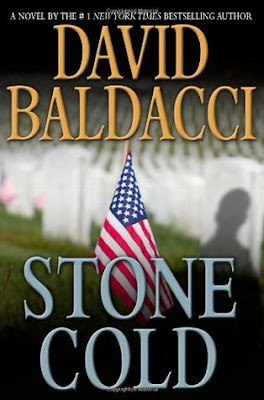 The #1 bestselling author of The Collectors and Simple Genius returns with STONE COLD...an unforgetable novel of revenge, conspiracy, and murder that brings a band of unlikely heroes face-to-face with their greatest threat.

Oliver Stone, the leader of the mysterious group that calls itself the Camel Club, is both feared and respected by those who've crossed his path. Keeping a vigilant watch over our leaders in Washington D.C., the Camel Club has won over some allies, but it has also earned formidable enemies-including those in power who will do anything to prevent Stone and his friends from uncovering the hidden, secret work of the government.


Annabelle Conroy, an honorary member of the Camel Club, is also the greatest con artist of her generation. She has swindled forty million dollars from casino king Jerry Bagger, the man who murdered her mother. Now he's hot on her trail with only one goal in mind: Annabelle's death. But as Stone and the Camel Club circle the wagons to protect Annabelle, a new opponent, who makes Bagger's menace pale by comparison, suddenly arises.


One by one, men from Stone's shadowy past are turning up dead. Behind this slaughter stands one man: Harry Finn. To almost all who know him, Finn is a doting father and loving husband who uses his skills behind the scenes to keep our nation safe. But the other face of Harry Finn is that of an unstoppable killer who inevitably sets his lethal bull's-eye on Oliver Stone. And with Finn, Stone may well have met his match.


As Annabelle and the Camel Club fight for their lives, the twists and turns whipsaw, leading to a finale that is as explosive as it is shattering. And when buried secrets are at last violently resurrected, the members of the Camel Club left standing will be changed forever.


With unrelenting pacing, stunning reversals, and two of the most compelling characters in modern fiction, STONE COLD is David Baldacci writing at his breathtaking best.

Stone Cold kept me on my toes. I had no idea what was going to happen next!

As with The Collectors two parallel storylines are being described.

The first one involves Annabelle Conroy. Annabelle is the con artist who robbed Jerry Bagger of forty million dollars from his casino as a revenge for killing her mother decades ago (book 2). She hates Jerry and she wishes she had done more damage to him but she also wants to stay alive.

Not long after, Annabelle learns that her cover has been blown and Jerry is coming for her. It's up to the Camel Club to help Annabelle survive. Annabelle will also get help from two other people, one her estranged father, Patty Conroy who she has not seen in years. The second person is Alex Ford, the secret service agent who was part of the first book.

The second storyline involves Oliver Stone who is really an ex-military killing machine. His real name is John Carr. He's ex-CIA and he has proven to be able to outsmart Carter Gray before. Having done this is the reason why his life is in danger now. Carter Gray and Roger Simpson would like nothing better than to have John Carr dead - for real this time.

Harry Finn is an ex-SEAL. He's a doting husband and father but he's also someone who's helping his mother seek revenge for the death of his father. One by one, the CIA agents who were involved in his murder must pay with their lives. Oliver Stone was one of them.

A multitude of things happened in Stone Cold. I felt sad for Oliver, he has lost everything except for his friends from the Camel Club. Gray was a great adversary. An evil man with his own personal agenda.

I also felt sorry for Harry. He had no choice but to follow his mother's commands. He was raised by her with only one purpose in life. Yet, he was worried about his family and he was hoping to keep his two lives separate.

I like the connection I saw between Annabelle and Alex Ford. They make a great couple.

With the way Stone Cold ended, I had no choice but to listen to the first two chapters of the next book, Divine Justice.