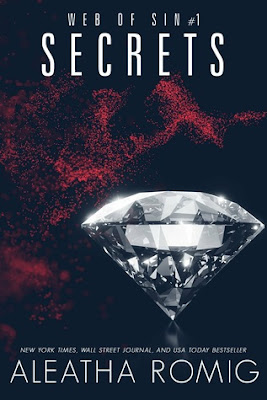 The twisted and intriguing storytelling that you loved in Consequences and Infidelity is coming back at you with an all-new alpha anti-hero in the dark romance series Web of Sin, by New York Times bestselling author Aleatha Romig.

I’m Sterling Sparrow. You’ve no doubt heard my name or read it on the top of tall buildings. There’s more to my business—my realm—than what is seen above ground.

Within the underbelly of one of America’s largest cities lives a world where a man’s word is either his most valuable tool or his most respected weapon. When my father ruled that world and that city, he promised me someone who would one day make my reign complete.

Since that day, long ago, Araneae McCrie has been mine.

My father is now gone.

The city and the underbelly are now mine.

The time has come for me to collect who was promised to me, to shred her life of secrets and make her who she’s always been—mine.

*Secrets is book one of the Web of Sin trilogy.

Aleatha has a way with words. She's always able to grab my attention from the very first chapter.

Secrets is the first book in the Web of Sin series. The dark setting intrigued me and the suspense made me turn the pages constantly.

The book begins with Renee being sent away by her adoptive mother. Their lives are in danger and she must run. Her mother hands her new a new identity and tells her she must move to Colorado. She will cease to be Renee and she will become Kennedy Hawkins. However, before she leaves, her mother reveals her true identity. Her real name is Araneae McCrie.

"The devil has been searching for you. And my greatest fear has always been that he find you."

Ten years later, due to her successful company Sinful Threads, she must return to the place she promised her adoptive mother she would never go back to, the city of Chicago. She will come to regret her decision. Or maybe not, after all, she will land in the arms of Sterling Sparrow.

"Sparrow, Allister Sparrow. He's currently in charge, but one day it will be his son, Sterling."

Sterling is a very powerful and rich man. Someone who has waited to take Araneae as his wife. He's determined to do so without a second thought. Araneae knows he has the information about her past she is desperate to learn. He holds all the cards. She must do as he says or the people closest to her will get hurt.

"Sparrow, Allister Sparrow. He's currently in charge, but one day it will be his son, Sterling."

I can't believe the book ends in a cliffhanger. There were so many lies and secrets! Everyone was hiding something. Araneae didn't know who to trust. I feel like there is much more for us to learn about Araneae's childhood and her real parents. I know Sterling has to be the good guy (although he's the anti-hero) and since her life is in danger, he has the means to protect her too.

I liked Araneae. She had a backbone. Even when she had no choice, she still made her dislike of the situation known. She didn't roll over and that was a plus.

Sterling is a smart man. He served his country, cultivated true friendships along the way and now he's the CEO of Sparrow Enterprises. We know he hated his father Allister Sparrow and that he was promised Araneae when he was too young to know better. He does have an obsession with her and I'm sure he has been following her progress through the years. It will be interesting to know how much he was involved in her life without her knowing.

I'm excited about the next book and I'm so glad Aleatha is not making me wait long.