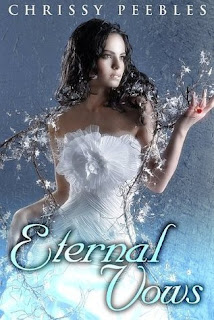 Sarah Larker has been investigating Bigfoot for a while. She knows the siting of this tall creatures has to do with her sister's disappearance ten years ago. It doesn't matter that her ex-boyfriend Frank has made fun of her in public. When she follows a creature to a cave, Frank goes in with her. They get transported by a portal to another world.
Sarah is mistaken for Princess Gloria and taken prisioner by King Victor. He forces her to marry him and she agrees to it because the ring that he gives her is a portal to her world.
She escapes Victor and tries to find her sister and avoid getting killed in the process. She discovers she is linked to Victor and that she is attracted to him as well.
Victor is strong and powerful character. I wish there was more interaction between them. That will probably be my one complaint. I think Sarah left too soon. I will read the second book.
3/5 Fangs
Posted by MrsLeif at 3:43 PM