I Heart New York by Lindsey Kelk (I Heart #1) 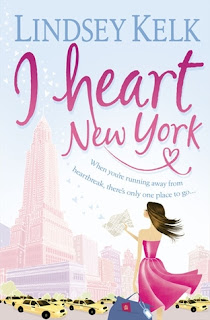 What does a girl do when she finds out her boyfriend is cheating on her? Move to NYC and start over?

Angela Clark is a British writer who thinks her life is perfect, that is until her best friend's wedding. Here she finds Mark (boyfriend) having sex with another girl in their car. The worst part is that her BFF, has known for a while, too. She ruins the wedding and packs her bags and takes the first flight to New York City.

She stays at a hotel, where she meets Jenny Lopez, who is a smart and sassy girl. Later they become good friends and roommates.

Angela needs to move on, needs to start dating again. She meets two guys within days from getting to NYC and likes them both.

She also finds a new job, as a blogger.

I root for Alex as the HEA.

Book 1 is amusing and I liked Jenny. There is not a cliffhanger per se, but you know there is more story to be told.