The Man I Never Met by Elle Cook 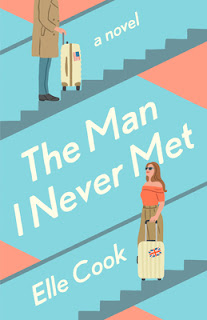 Is it possible to love someone you've never met? A young woman finds out in this sweeping will-they-or-won't-they love story that begins with a chance wrong number dial. . . .
When Hannah picks up a call from an unknown number, she thinks nothing of it--it's just an easygoing American named Davey who misdialed her while calling into a job interview. And when Hannah wishes him luck after clearing up the confusion, she never actually expects to hear from him again.
Then she gets a text saying he got the job and he'll be moving to London, and she can't help but smile. Soon their texts become phone calls that turn into video calls, and their friendship becomes a relationship they can't wait to start in earnest once Davey lands in London in a month's time.
But when Hannah goes to meet him at the airport, Davey isn't there--and the reason why changes both of their lives in an instant. With their future together suddenly so uncertain, they don't know what to do but try to move on from each other.
Though their chance at love seems lost forever, neither is never far from the other's thoughts. Will fate intervene once more to bring the two together, or will Davey always be the man that Hannah never met?

So many feelings!
A wrong phone call places two strangers in each other's orbit.
Hannah is single and living in London. She is a young woman who is happy with her life, she spends time with her best friend and her friend's husband.
Davey is British but he has been living in the USA since he was a child.
When Davey calls Hannah by mistake, their paths will intersect. The same night Davey send a text telling her that he got the job. He is going to be moving to London. More texts followed over the next few days. They graduate then to phone calls and lastly to video calls over the next few months. A friendship begins until new feelings start developing on both sides.
As Davey's move becomes imminent, the two can stop thinking about it and be excited to finally be together. Hannah decides to pick him up at the airport but Davey never shows and the reason behind it is a big one.
Thoroughly enjoyed this love story of serendipity mixed with hope! I liked both characters and I was rooting for a happy ending. The secondary characters were also quite interesting and good friends all around.
Cliffhanger: No
4/5 Fangs
A complimentary copy was provided by Random House Publishing Group - Ballantine, Dell via Netgalley in exchange for an honest review.
Posted by MrsLeif at 4:49 PM