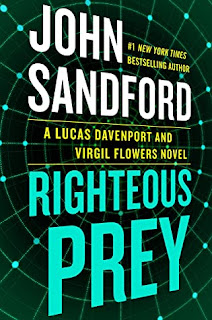 Lucas Davenport and Virgil Flowers are up against a powerful vigilante group with an eye on vengeance in this stunning new novel from the #1 New York Times bestselling author.
“We’re going to murder people who need to be murdered.”
So begins a press release from a mysterious group known only as “The Five,” shortly after a vicious predator is murdered in San Francisco. The Five is made up of vigilante killers who are very bored…and very rich. They target the worst of society—rapists, murderers, and thieves—and then use their unlimited resources to offset the damage done by those who they’ve killed, donating untraceable Bitcoin to charities and victims via the dark net. The Five soon become popular figures in the media …though their motives may not be entirely pure.
After The Five strike again in the Twin Cities, Virgil Flowers and Lucas Davenport are sent in to investigate. And they soon have their hands full--the killings are smart and carefully choreographed, and with no apparent direct connection to the victims, the killers are virtually untraceable. But if anyone can destroy this group, it will be the dynamic team of Davenport and Flowers.

I'm all caught up with this series. Unfortunately, I can't say the same about my reviews since I need to catch up.
Anyway, I was so happy with being able to read/listen to Righteous Prey.
In this installment, Lucas deals with bitcoin billionaires who have created a group called the Five. This group is targeting individuals to kill them and later on they brag about it.
Thankfully, Lucas is not alone, he has Virgil Flowers with him. I haven't read Virgil's series but he has been in enough of the Prey series, that I already know I like him.
As always there is a sense of urgency to stop them before one more dead body is found while still delivering good humor and an interesting resolution.
If I have one complaint it will be politics getting more pages in this book than priors. As a rule, I don't like politics in my fiction. There is already enough of it on the news, social media, etc.
Cliffhanger: No
4/5 Fangs
A complimentary copy was provided by G.P. Putnam's Sons via Netgalley in exchange for an honest review.
Posted by MrsLeif at 4:38 PM