The House in the Cerulean Sea by T.J. Klune 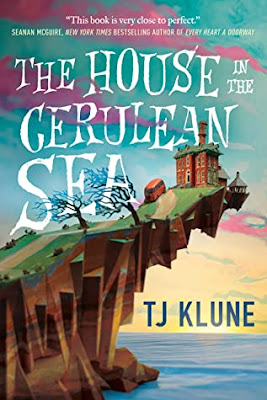 A magical island. A dangerous task. A burning secret.
Linus Baker leads a quiet, solitary life. At forty, he lives in a tiny house with a devious cat and his old records. As a Case Worker at the Department in Charge Of Magical Youth, he spends his days overseeing the well-being of children in government-sanctioned orphanages.
When Linus is unexpectedly summoned by Extremely Upper Management he's given a curious and highly classified assignment: travel to Marsyas Island Orphanage, where six dangerous children reside: a gnome, a sprite, a wyvern, an unidentifiable green blob, a were-Pomeranian, and the Antichrist. Linus must set aside his fears and determine whether or not they’re likely to bring about the end of days.
But the children aren’t the only secret the island keeps. Their caretaker is the charming and enigmatic Arthur Parnassus, who will do anything to keep his wards safe. As Arthur and Linus grow closer, long-held secrets are exposed, and Linus must make a choice: destroy a home or watch the world burn.
An enchanting story, masterfully told, The House in the Cerulean Sea is about the profound experience of discovering an unlikely family in an unexpected place—and realizing that family is yours.

What a wonderful story this one is!!
The House in the Cerulean Sea is remarkable in all its greatness. From start to finish, there was nothing more that I wanted to do but to keep on listening.
The characters all became dear to me in every way possible. They were all so charming in their own special way and I love how Linus was able to give them something while getting something back in return.
Linus Baker is a man that likes order. He abides by the Rules and Regulations and has the book to prove it. Linus has been in the same job for almost two decades but has never wanted a supervisor job. As part of the Department in Charge of Magical Youth, his job is to investigate the orphanages housing magical children and to make a recommendation as to keep them open or closed for good.
When Linus gets a memo from Extreme Upper Management and he's asked to travel to investigate Marysas Island Orphanage, his shock is real. He has never heard of the place. It's even worse when his assignment takes him (and his cat Calliope) to the island and he meets the children living there and the man supervising them, Arthur Parnassus.
Linus has four weeks to learn more about the children and Arthur. As the days pass, to say the children were not what he was expecting would be a lie. Yes, they can be perceived as dangerous but exactly to who?
The House in the Cerulean Sea is a moving story with magnificent characters, wonderful humor, and love in all its manifestations. Quite priceless.
Simply put, it was cerulean magic.
Cliffhanger: No
5/5 Fangs
Posted by MrsLeif at 8:38 PM