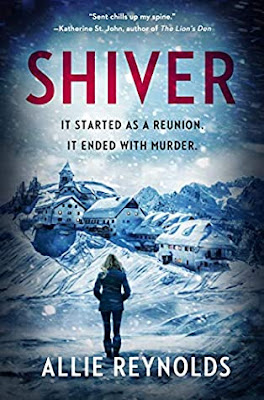 In this propulsive locked-room thriller debut, a reunion weekend in the French Alps turns deadly when five friends discover that someone has deliberately stranded them at their remote mountaintop resort during a snowstorm.
When Milla accepts an off-season invitation to Le Rocher, a cozy ski resort in the French Alps, she’s expecting an intimate weekend of catching up with four old friends. It might have been a decade since she saw them last, but she’s never forgotten the bond they forged on this very mountain during a winter spent fiercely training for an elite snowboarding competition.
Yet no sooner do Milla and the others arrive for the reunion than they realize something is horribly wrong. The resort is deserted. The cable cars that delivered them to the mountaintop have stopped working. Their cell phones—missing. And inside the hotel, detailed instructions await them: an icebreaker game, designed to draw out their secrets. A game meant to remind them of Saskia, the enigmatic sixth member of their group, who vanished the morning of the competition years before and has long been presumed dead.
Stranded in the resort, Milla’s not sure what’s worse: the increasingly sinister things happening around her or the looming snowstorm that’s making escape even more impossible. All she knows is that there’s no one on the mountain she can trust. Because someone has gathered them there to find out the truth about Saskia…someone who will stop at nothing to get answers. And if Milla’s not careful, she could be the next to disappear.

As someone who has tried snowboarding before, Shiver was just up my alley.
Mila receives an invite to the ski resort in the French Alps. She has not been back in a decade and she has not seen her other four friends, Curtis, Dale, Heather, and Brent since then. A terrible thing happened the last time she was there and putting some distance was the only way to deal with her memories.
Saskia disappeared ten years ago. Saskia was Curtis's sister. She was also not so nice. She played games and loved to see her attacks deliver the punch she intended. Saskia was an excellent snowboarder and Mila was worried about competing against her. Mila knew she needed to train harder, be faster, and have some tricks under her sleeve to win a spot.
Then Saskia disappears the day of the competition.
At present and soon after arriving at the resort, they discovered they are stranded. Their phones have been taken. No one else is at the resort except for them. No help is coming!
There are so many questions:
Who is doing this to them and why?
Is it Saskia?
Is it revenge?
And the biggest one,  Is one of them a killer?
Great debut for this author! I truly enjoyed listening to the audio. The two timelines and the plot were well done. I could feel the snow, the impending storm, the fear, and the suspense. Yes, I did guess most of the twists but I was still unsure of a few.
I also liked that Shiver gave me some insight into what snowboarder competitors go through. The training, the injuries, the falls are all so intense and cutthroat.
Personally, I believe snowboarding to be hard. Going down the mountain can be exhausting. Falling is hard and painful. My rotator cuff and my knee can attest to it.
Cliffhanger: No
4/5 Fangs
Posted by MrsLeif at 8:47 PM