Big Lies in a Small Town by Diane Chamberlain 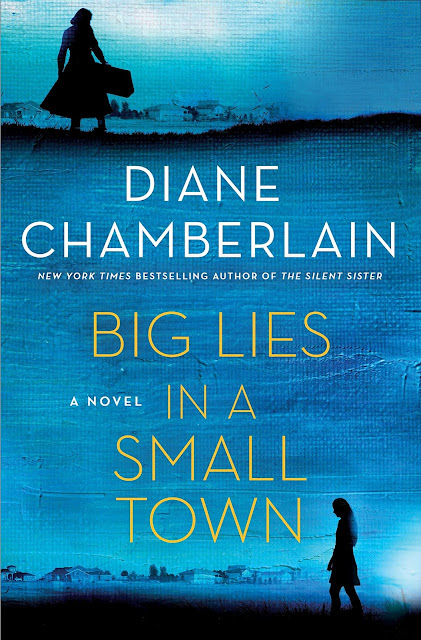 North Carolina, 2018: Morgan Christopher's life has been derailed. Taking the fall for a crime she did not commit, she finds herself serving a three-year stint in the North Carolina Women's Correctional Center. Her dream of a career in art is put on hold—until a mysterious visitor makes her an offer that will see her released immediately. Her assignment: restore an old post office mural in a sleepy southern town. Morgan knows nothing about art restoration, but desperate to leave prison, she accepts. What she finds under the layers of grime is a painting that tells the story of madness, violence, and a conspiracy of small town secrets.

North Carolina, 1940: Anna Dale, an artist from New Jersey, wins a national contest to paint a mural for the post office in Edenton, North Carolina. Alone in the world and desperate for work, she accepts. But what she doesn't expect is to find herself immersed in a town where prejudices run deep, where people are hiding secrets behind closed doors, and where the price of being different might just end in murder.

What happened to Anna Dale? Are the clues hidden in the decrepit mural? Can Morgan overcome her own demons to discover what exists beneath the layers of lies?

Quite a great story this one was!

Big Lies in a Small Town has the voices of two women, Ana Dale and Morgan Christopher. One's past and one's present connected in the most unusual way.

Morgan Christopher has had a rough time. She is only twenty-two but she has already known tragedy. She has a problem with alcohol and she was involved in a car accident. She not only lost faith in her boyfriend Greg that night, but she also lost her freedom. She has been in prison serving her sentence in Raleigh, NC until she's offered a deal of a lifetime. In his will, a famous artist, Jesse Jameson Williams, has requested for her to restore a post office mural done by a female artist in the 1940s. A new lawyer will work on her release if she accepts the job.

In the 1940s, Ana Dale has won a national mural painting in the town of Edenton, NC. As an artist, recently out of school, she’s excited to have won the competition and she can’t wait to begin painting it. Her mother recently committed suicide and a change in venue is something Ana welcomes. What Anna was not expecting is for the "movers and shakers" of Edenton to have their own opinions about what she should draw, or for a local artist to be jealous of her winning the competition instead of him or for racism to be so prevalent around her and her mural.

Little by little as the story progresses, we learn more about these two women’s lives in different timelines. Their voices were powerful and demanding of the reader's attention.

Diana Chamberlain is a master at threading an interesting story and transporting us to the past and making us live the moment in time.

A complimentary copy was provided by ST. Martin's Press via Netgalley in exchange for an honest review.