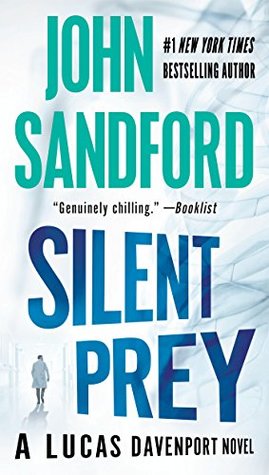 He was right. His guards slain, the brilliant, insane pathologist of Eyes of Prey flees to New York, there to continue his research into aspects of death. Carefully, he conducts his experiments, searching the eyes of his dying victims for what they can reveal, the mounting body count causing an uproar in the city.

In desperation, the police reach out for the man who knew Bekker best, but when Lucas arrives, he finds unexpected danger as well. For Lily Rothenburg, the policewoman whose intense affair with Lucas has never completely faded, is there too. Now, consumed with her own investigation of a group of rogue killers within the police department, she draws Lucas into her orbit again, until their hunts merge, their twin obsessions driving them ever closer to the edge . . . and then over.

Silent Prey follows Lucas as a consultant this time for the NYPD.

Lily Rothenburg comes to Minnesota to ask Lucas to come to her city to catch Bekker, the deranged criminal from Eyes of Prey who escaped during his trial to NYC. Dekker is not only killing his victims but he's also publishing articles about his "medical findings".

For her part, Lily wants Lucas to help her with her own investigation into a group of possible rogue cops nicknamed, Robin Hood who are murdering people who they consider dangerous. When one of Lily's cop friends, Walter Petty, who's investigating Robin Hood gets murdered, it makes it personal for her.

Silent Prey was easy to enjoy. Even though I haven't liked Lucas because of his philandering ways, he's starting to change or at least he's trying. He's still an arse but not a complete one. He does make me laugh and he's a true detective. I like how he pieces things together and he always gets to surprise me with something.

I wasn't a fan of Bekker and in this one, he was even weirder. I have no clue how a psychopath like him who was always high on so many things could even move, let alone plan and abduct anyone.

The Robin Hood storyline was much more interesting to me than the Bekker one. Sandford made no one safe and that kept my interest going.

I've decided to stick with this series and hope for the best.