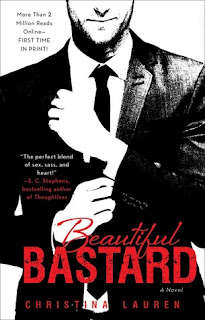 Bennett Ryan is an arrogant bastard. He is an obnoxious boss. He slams doors and can be rude. This is what Chloe Mills thinks about her beautiful bastard boss. Yes, he is handsome and smart but anytime he speaks she wants to shut him up. She even thought about carrying tape with her.
She has worked for his family for many years, but Bennett has been away in Paris making a name for himself during this time. But when he decides to come back, he is given Chloe as his assistant. Someone who is smart and extremely attractive. She only wears designer clothes and is always perfectly presentable. He is attracted to her but also hates her or so he believes.
Everything changes for both after a passionate afternoon. They become addicted to each other. The more they are together the less they want to be apart. It is hard for them to open up about their feelings and to find a way to be together without their jobs being affected.
3.5/5 Fangs
Posted by MrsLeif at 9:08 PM