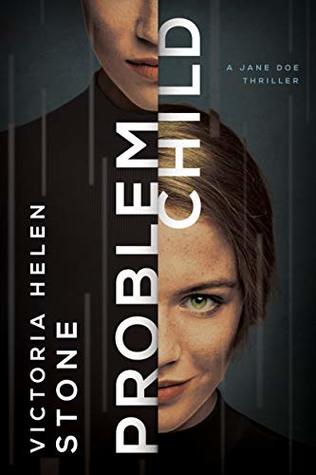 She’s cold, calculating, and can deceive with a smile. Jane Doe is back in the Amazon Charts bestselling series—and this time she’s met her match.

After a brutal childhood, Jane Doe has been permanently wired to look after herself and only herself. Now, looking next to normal, Jane has a lover and a job. But she hasn’t lost her edge. It sharpens when she hears from her estranged family.

Jane’s deeply troubled sixteen-year-old niece, Kayla, has vanished, and no one seems to care. Neither does Jane. Until she sees a picture of Kayla and recognizes herself in the young girl’s eyes. It’s the empty stare of a sociopath.

Jane knows what vengeful and desperate things Kayla is capable of. Only Jane can help her—by being drawn into Kayla’s dark world. And no one’s more aware than Jane just how dangerous that can be.

Jane Doe was such an amazing thriller! I loved reading about Jane's journey and I was so happy it had a sequel in Problem Child.

Jane is working in the city. She has her loving cat and she's still in a relationship with Luke (who's oblivious). At work, she's planning to punish another lawyer who has been using her work without giving her the proper accolades. Then, she gets a phone call. Her niece is missing. At first, Jane couldn't care less. She doesn't want anything to do with her family. None of them are good for anything. This is until she is sent a picture of her teenage niece and she realizes she has that empty stare Jane has herself.

Jane decides she needs to know for sure. Is her niece Kayla the same as she is or is the picture just a picture. With this in mind, Jane goes back home. She meets with her brother, who's in jail and her parents who are living still in the same place. Her mother has no lost love for Jane but Jane couldn't care less, she just wants to find her niece. During her investigation, she realizes that Kayla has gotten involved with the wrong kind of people. People who are powerful and who would not bat an eye about killing a young woman.

For the most part, Problem Child gave me all the right emotions. I love being in Jane's head and I love how deceiving she can be. She's a strong female character (which I adore) and just like Dexter, she can feel something for someone. I felt the storyline dragging in the middle of the book and I was losing interest in the search for Kayla. That brings me to my last point, I didn't like Kayla. I hope if there is a next book, Mrs. Stone changes my mind.

I wasn't shocked by the ending but it leaves the door wide open for a third installment.

A complimentary copy was provided by Lake Union Publishing via Netgalley in exchange for an honest review.
Posted by MrsLeif at 9:57 PM