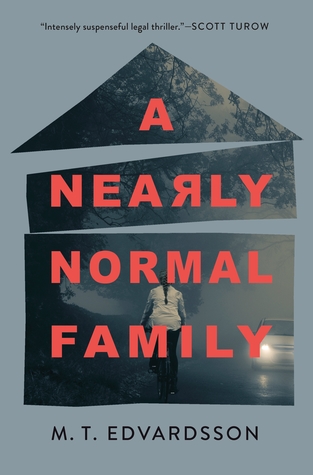 M.T. Edvardsson’s A Nearly Normal Family is a gripping legal thriller that forces the reader to consider: How far would you go to protect the ones you love? In this twisted narrative of love and murder, a horrific crime makes a seemingly normal family question everything they thought they knew about their life—and one another.

Eighteen-year-old Stella Sandell stands accused of the brutal murder of a man almost fifteen years her senior. She is an ordinary teenager from an upstanding local family. What reason could she have to know a shady businessman, let alone to kill him?

Stella’s father, a pastor, and mother, a criminal defense attorney, find their moral compasses tested as they defend their daughter while struggling to understand why she is a suspect. Told in an unusual three-part structure, A Nearly Normal Family asks the questions: How well do you know your own children? How far would you go to protect them?

What would you do for your child?
Would you lie for her?
Would you go against your principles to save her?

This is the conundrum, Stella's parents will find themselves in M.T. Edvardsson's debut novel.

Stella Sandell is not your typical teenager. Her mother is a criminal defense lawyer and her father is a well-known pastor. Stella has had problems since she was a child. She had problems with impulse control, explosive anger disorder, ADD, and she has dwelled for a little bit with drugs and alcohol.

In Stella's mind, her father, Adam is too overprotective. When she was little she adored him but as the years passed, she started becoming annoyed by him. She plans to take a trip to Asia to be free of his constant presence. On the contrary, her mother, Ulrika was a workaholic and Stella felt she was never there for her growing up. For Stella, the only constant in her life has been Amina Besic, her best friend since they were in kindergarten. These girls are loyal to each other and they have each other's backs. Stella and Amina decided early on not to let any man come between their friendship. They have no idea that on this, their friendship will be tested.

While on a night out, Amina and Stella meet an older man, Chris Olsen. In the beginning, it seems that Chris is interested in Amina but as the night progresses and a taxi cab ride later, Stella and Chris are in route to becoming a couple. What develops should be a romance, instead just a few weeks later, Chris is found murdered and Stella is the prime suspect.

I enjoyed this Swedish novel. It's narrated in three parts. The first part by Adam, the second part by Stella and the third part by Ulrika.

I got to be honest here, I didn't like Stella one bit while Adam was narrating his part and even at the beginning of Stella's POV. Yet, by the time I finished hers and began Ulrica's, I had completely changed my mind.

The ending was just like I imagined it: Very satisfactory. I'm not sure what it says about me.

“I was full of conflicting emotions. As a lawyer, I was guilty of the most horrific violation of the law one could imagine. As a mother, my choice was the only correct one. I still had no idea what had happened on Friday night, but I knew with certainty that it was my duty to protect my daughter”

A complimentary copy was provided by Celedon Books via Netgalley in exchange for an honest review.
Posted by MrsLeif at 10:35 AM