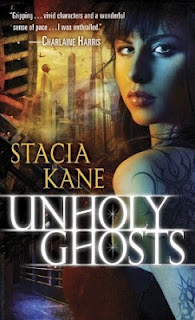 Chess (Cesaria Putnam) works for the Church of Real Truth as a Debunker. She has magic and tattoos that have power. She is able to connect with Ghosts.
Many years ago, Ghosts rose up and killed a third of the population. This was known as the Haunted Week. The Church of Real Truth used to be a tiny group, devoted to the theory and study of magic. After that horrible week they became the government and authority. They were the only ones who were able to control and defeat the ghosts.
We know Chess was left by her parents and placed in the system. She has been abused and she is  drug addict (probable to forget the abuse). She thinks of the Church as a safe place.
There a two male characters, both with flaws.
First, there is Terrible who works for a drug lord as the bodyguard. At the beginning Chess thinks of him as an unattractive killer. Later, she gets to know him better.
The other man is Lex, who is also a bad/good guy. He needs help from Chess and in exchange he will provide her with free drugs.
This world is not perfect and the characters are not perfect either.
Many of my friends love this series. I will have to read the rest to see if I become as addicted as they are. My main problem is the drugs and the lack of other religions.
4/5 Fangs.